GHATS OF BANARAS: LYRICS OF THE MYSTIC

If Banaras is said to be older than tradition, its ghats are eternal. The Banaras of antiquity is the notion that still works as potion for this confused Banaras of the day, when it is struggling to maintain the harmony between antiquity and modernity to retain its identity that it has acquired over the ages by its association with the Ganges, ghats, Lord Shiva and a culture fed by this combination, a culture embedded in spirituality, spirituality pivoted in mysticism, a mysticism transformed in cultural ethos. A septuagenarian man had come to Harishchandra Ghat for last rites of his wife. As he approached the ghat, he seemed like a broken person who just had lost his best friend of life. While sitting there performing the rituals, slowly he graduated to a calm. It was after some time, that he made a statement. His quote, "while we are sitting at this doorstep of God, we come to realize everything is just an illusion, everyone will go, everything will be lost, its better that we realize it as soon as possible, so that we can seek the God in more and more manifest ways. Once we turn our back, we forget all this realization, this illumination about illusion and existence, to get soaked again in our relation, our existence", was not a unique thought. My friends and I had realized it many times when we used to take a halt at Harishchandra Ghat or Manikarnika Ghat during any of our exploratory trips to Banaras ghats. I do believe that there are innumerable others who have felt this feeling while roaming across these Banaras ghats. 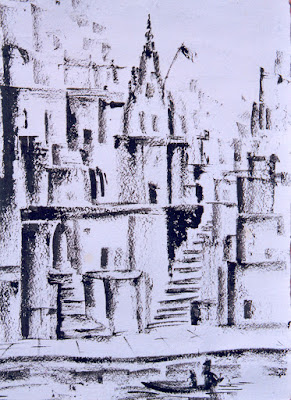 Blade sketch of a Banaras ghat by Ragini

This is mysticism at its most pious illumination for it shadows the prevailing culture of all other ghats and a micro cosmos that thrives-on in lively serpentine by lanes of these ghats. This mysticism has found its harbingers right from the beginning, from Raja Harishchandra to many present-day faceless proponents of its spiritual mystic. It has nurtured the likes of Shankaracharyas, Tulsidas, Kabir Das, Ravidas, Bhartendu and they have imparted this mysticism its all possible hues. So the mysticism of these ghats is just not nondualistic, it is very well dualistic too. If Harishchandra was in pursuit of nondualistic mysticism devoting his all to the pursuit of truth denying every existence, be of his own, or others who he could have affected, Tulsi, Kabir and Ravidas chose a path mostly dualistic. Their pursuit of life on one way was to find the ultimate, the connect to the God, on the other hand they worked to engage and liberate masses through works like Ramcharit Manas, Kabir Panth and Ravidas Following.

All the Banaras ghats are different stories and each has a mystic of its own. The narrow habitations have an atmosphere dominated by aura of temples and a social configuration that feeds on it. If these temples have devotees seeking just some time to be in vicinity with the God, these are also places that attract those seeking answers from life mainly drawn by its mystic tradition. If its mysticism teaches about complete detachment with external world in pursuit of communion with the self in order to find illumination, a type pf mysticism explained in 'Kaivalya', 'Shankhya' or in Chassidic Schoold of Judaism, it is also known for pursuit of knowledge intended to find an intrinsic connect within this world to realize God and hence self through His creation. Pursuit of knowledge in order to realize a blissful human nature or pursuit of a knowledge to realize supernatural transcendental powers as practiced by Tantra Vidya and similar outlets widen the horizon even more. And such practices are spread across Ganges ghats and its habitations. Teacher and pupil tradition is still surviving here and it largely owes to this mystic of ghats. The flow from physical establishments to spiritual confusion gets a place of solace here if the seeker is pure in heart for her or his pursuit. This solace transforms in a metaphysical state of mind and flow becomes more and more regular in the course to the pursuit. The journey adopts a lyrical character with micro cosmos, macro cosmos, meso cosomos and their transcendental dimensions interweaved in the pursuit to the metamorphosis of a soul into a mystic. The mystic that may be detached from the world or may be deeply intrinsic into the world. Ghats of Banaras teach us to construct lyrics of this divine cosmic transcendental dimension along with other lessons to life that seem to make it a vibrant, lively and colourful Banaras that is manifest from every inch of stoned surface of ghats embodying a great soul lyrics of eternity.
Posted by Santosh Chaubey at Sunday, August 02, 2009