Sudan is going to hold elections next year. Sudan and election! Yes, this possibility is to become a reality in 2010, if we do not have yet another deadlock of faction rivalry, if the five years of wait after 2005 peace accord doesn’t get extended. 2005 marked an end of two decades of civil war between North and South Sudan when a Comprehensive Peace Agreement was put in place. It was expected to bring an initiative to bring Darfur back to peace process on the part of Sudan’s centre. But nothing has happened. And the way things are moving, it seems nothing will happen. And why so? Darfur’s conflict will tell us.

The upcoming elections, first in two decades, have great symbolic significance for Sudan, for it will be a spectacle for Omar Hassan al-Bashir, the authoritative President of Sudan, to tighten his grip by this much awaited propaganda event and to get one more reason to defy the international law and order establishment, another damp squib which has failed to exercise its decree in authoritative and dictatorial regimes of the world. The way Omar al-Bashir had reacted to the International Criminal Court’s decision to indict him for war crimes and Darfur massacres, when he expelled 13 international humanitarian agencies out of Darfur, is indicative enough how he is going to handle these Sudan elections, particularly in Darfur.

Darfur crisis is result of 2003 revolt of mostly non-Arab militias of the region against the alleged state neglect. State did what an authoritative state had to do; it deployed troops and Arab militias or Janjawid to control the rebel surge. Externally supported ethnic Darfurian groups and Sudan supported militias and its troops have been waging a war since then and they have mercilessly targeted inhabitants of the area. The Khartoum death count is around 10,000 while UN humanitarian chief John Holmes put this figure around 300,000. UNICEF recently reported that around 80 infants die daily in Darfur due to malnutrition and this figure is based on limited regional reach of aid agencies. As early as in 2004, US Secretary of State Collin Powell had termed deaths in Darfur a genocide. 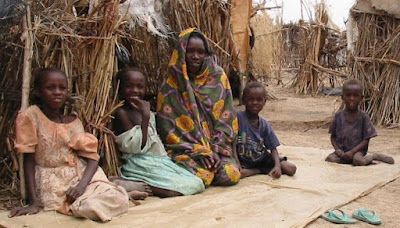 Darfur, almost of the size of France with a population around 6 million (2006 figures) as put by some international agencies, has had a history of ethnic clashes and this ethnic divide has worked as a double edged sword for people of the region; they are targeted by govt supported mercenaries on one hand and at the same time, are crushed by the warring ethnic warlords. According to Refugee International figures, more than 2.2 million internally displaced people are in Darfur and over 200,000 are living in refugee camps in Chad. United Nations says more that 2.7 million have fled their homes and are living in camps. When approximately half of the population is on the run, expecting a change as an election outcome is nothing more than deceiving the already shattered 6 million hopes.

People of the region have seen nothing but atrocities and deaths after the civil war erupted. State never looked serious in its efforts to realign the peace movement. African Union brokered Darfur Peace Agreement of 2006 between the Sudanese govt and Darfur rebel group Sudanese Liberation Movement (SLM) failed miserably as most other rebel groups kept out of it. Widespread violence had been reported in the region after the peace deal was brokered. As recently is in July this year, Justice and Equality Movement (Jem), the most active rebel group, did not attend the Egypt peace talks on Darfur crisis between Hosni Mubarak and Omar al-Bashir.

When nothing is working for people of the region, the basic entity of the electoral process, elections are not going to work. They are going to be State managed. International pressure is only on paper. Sudan has been delaying issuing visas to UNAMID staff. UNAMID is the joint UN-African Union peacekeeping force for Darfur. Then reaction to ICC’s indictment is already there. We can expect the role of international watchdogs during Darfur elections then. Though on its part, Sudan is saying it has included IDPs of Northern Darfur in the electoral constituencies so that they can participate in 2010 elections. North Darfur Higher Electoral Committee has delineated 14 constituencies for national parliament and 29 constituencies for regional camber. But the demarcation process of geographical constituencies of the region does not include census of the camps which are situated in the war ravaged areas as revealed by the Census Director in West Darfur, Ms Wafaa Hassan Mansour. So the uneven representation, that is going to be highly skewed in favour of State, has been curtailed even more.

This ongoing situation has worried United Nation though it cannot do much. UN under-secretary-general and its Peacekeeping Chief Le Roy’s words reflected this when he said, "The contested census, large-scale displacement and volatility - particularly in the area bordering Chad - create enormous risks that the people of Darfur will not be in a position to participate in the electoral process,".

The larger and the more sensitive issue here is the ‘alienation and the aftermath’ that this disempowerment would bring after the elections are over. Such a grounding of ‘already shattered’ hopes may prove a damp squib that would be fatal enough for any peace process to come back to the negotiation table in the near future escalating the pace of human carnage in the worst humanitarian crisis of 21st Century..
Posted by Santosh Chaubey at Monday, July 27, 2009